As you are probably aware the Veterans event due to take place in Almunecar Spain in September has bee cancelled due to lack of entries.

Kent Badminton is running our Open tournament  on this week-end and you all had experience of the event last year in November.

We have same management team running the event that ran the 6- Nations event last year.

I have set out below a few relevant details but I will send a full prospectus in the next few days. Friday 21 September  (Afternoon) Singles ( Mens and Ladies age groups 40+ to 70+ in sections of 5 years if enough entries received for each age group)

All Events to conclusion on Saturday and Sunday

If suffiicient numbers the early rounds will be played in groups . Best of 3 games to 21 rally point scoring.

The closing date for entries is Saturday 25 August 2007

If it is easier I will accept entries either on a schedule (as per 6 - nations) or individually .

It is hoped to run a social event during the weekend.

Transport can be arranged from the airports at a cost to the player.

We are anticipating a good standard entry from the English players.

Look forward to hearing from you, 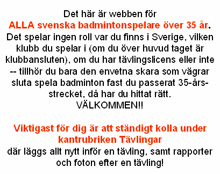